Psychopaths are often likened to snakes and called “reptilian.” Here’s why.

What images are conjured by the word “reptile?”  A snake devouring its prey after either strangling or poisoning it?  A crocodile submerged just below the water’s surface so only its eyes are visible, ready to strike?  Or perhaps an unblinking lizard soaking in the heat of the sun?  Psychopaths are often said to be akin to reptiles, but how so and why?

The Psychopath and the Reptilian Cerebrotype

Prominent psychopathy researcher, Dr. J. Reid Meloy, in his seminal work, The Psychopathic Mind: Origins, Dynamics, and Treatment, presented his hypothesis establishing the reptilian cerebrotype (brain structure) as an anatomical underpinning for the psychopath’s personality disorder.  After noting that the human brain’s limbic structures are key to affection and emotions, Meloy points out that they are absent in reptiles, and then states,  “[Psychopaths] share with the reptilian cerebrotype an inability to socialize in a consciously affectionate and genuinely expressive manner.”1The reptilian brain has the capacity to hunt, defend its territory, feed, mate, compete and display aggression and dominance.2  These also happen to be traits that characterize most psychopaths. 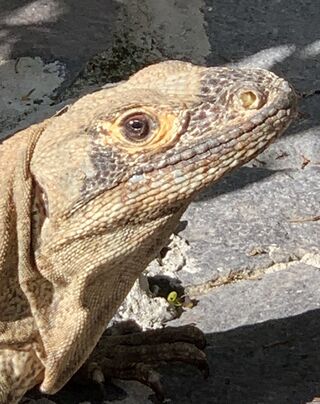 The Reptilian Stare
According to Dr. Jacqueline Helfgott, “Clinical observations support the idea that psychopaths engage in acts of visual predation or a ‘reptilian stare.’”3  Growing up in a home with a psychopathic mother and sister,  I experienced this all too often.  It was an icy, cold, distant, unfeeling, yet penetrating look.  Media depictions of psychopaths often focus on the eyes, stressing they are emotionless or hollow.  Even the popular primer on psychopathy, Robert Hare’s Without Conscience, features on its cover a pair of eyes, deep-set and without pupils, staring at the reader.4  Some say a psychopath’s eyes are cold and foreboding, the eyes of a predator, while others say they have a hypnotic stare or a look of emptiness akin to the eyes of a reptile.Many reptiles, including most iguanas, are physiologically unable to blink which gives them the characteristic stare.5  On a recent trip to Costa Rica, I captured an example of that stare on camera which is the photo displayed in this blog.  The psychopath’s stare, however, has no         physiological explanation.  It can be used as a tool for control or to signal dominance.

“Unlike a mammal, a lizard does not have parents who protect it and teach it what to do.”6  Anyone who has a psychopathic mother also knows what this feels like.  If you had the misfortune of growing up in a home with a psychopathic mother, you would know what it is like to feel unsafe and insecure.  “What is absent in the reptilian cerebrotype is a parental response to its offspring … .”7  Meloy also points out that reptiles do not collect and store food or otherwise provide for future needs for itself or its offspring.  All too often these traits are hallmarks of the psychopathic mother who has an absence of love and an indifference to her children.8

When Attachment is Absent

When I was taking the iguana photo, I got within two feet of it and spoke some words to it in a soft voice.  It seemed to respond, as though it was either listening or showing some sense of attachment.  An internet search of reptilian attachment or emotions produces many results that might suggest that attachment was possible.  However, according to Meloy,  “Attachment is deeply rooted in both birds and mammals but is generally absent in reptiles.”  To that statement, he added this footnote:  “Sometimes people with reptiles as pets will misinterpret their thermotropic (heat-seeking) behavior as an emotion related to attachment.”9So the iguana was not drawn to my gentle voice and kind words after all but to the heat coming from my close presence.  I should have known better … just like the psychopath, only getting close to get something from you!
Share Post: